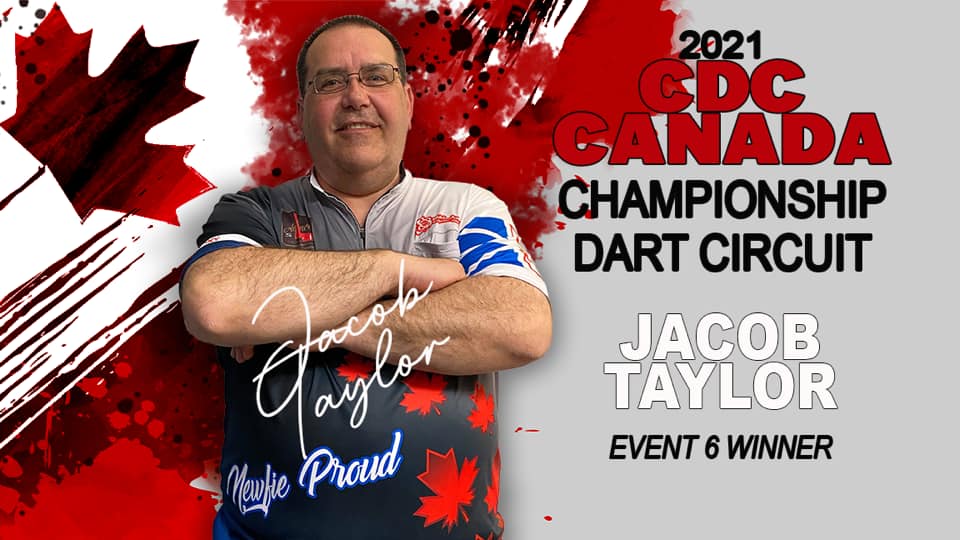 2021 Canada Championship Darts Circuit wrapped up on Sunday in Cambridge, Ontario with Jacob Taylor knocking off the #1 seed and newly-minted PDC Tour Card Holder, Matt Campbell, to capture his first CDC title. With the finals match deadlocked at 3 legs apiece, Taylor found his rhythm and a whole bunch of treble 20s, unleashing a barrage of 140s to finish an 11-dart leg, followed by a 12-darter, before going on to secure a 6-4 win.

Taylor also took out several of the CDC’s other elite players on his way to the finals. He opened with a tough first round draw against David Cameron, whom he defeated 5-3. He then defeated second seed Jim Long (5-3), Jason Roker (6-2), and third-seeded Kiley Edmunds (6-1) in the semi-finals, consistently outscoring his opponents in each round.

Matt Campbell, who was looking for his second title of the season, opened up his day with a win against Ben Garner to avenge his loss in their last meeting in Moncton. He followed it up with a convincing win against Oliver Jones (6-1) in the quarter-finals, and a close victory against Dave Richardson (6-3) in the semifinals. Campbell averaged over 90 in both matchups.

John Norman, Jr.’s bid for a third consecutive title fell short in a high quality, back-and-forth quarterfinal against Dave Richardson. Despite failing to make the finals on Sunday, Norman finished top of the table for the Canadians during the 2021 season and has earned a spot at the 2022 William Hill World Darts Championship.

In Event #6, Norman led the way with a 93.01 average while Taylor connected on eleven 180s, 44% of his checkouts, and won 70% of the legs he played (all of which were tournament highs). Jim Long reeled in the big fish, with a 170 checkout during his loss to Taylor.

The top 8 Canadians on the final 2021 Tour Points List will be invited to the Continental Cup tournament, which takes place November 20 in Woodside, New York. Full standings will be available at champdarts.com.