‘Big Daddy’ Darin Young’s dominance on the 2019 Magic Darts Championship Darts Circuit continued apace yesterday in Philadelphia as he claimed his third title of the year on five finals appearances. More importantly for Young, his seventh title in the five-year history of CDC saw him book his place at the 2020 William Hill World Darts Championship at the Alexandra Palace, London.

The entire 2019 campaign has been one of intense focus for Young after being edged out by Chuck Puleo for the U.S. World Championship spot in the final Tour event last year. The Pennsylvanian was determined not to leave that door open again and his quarterfinal win over Joe Huffman guaranteed him a tenth PDC World Darts Championship appearance.

Darin’s road to the title was not without a series of bumps, however, as he showed some terrific bottle to come through three consecutive last-leg deciders to reach the final. After opening things up with a 5-2 victory over local favorite Timmy O’Brien, Young was pushed to the limit by qualifier Dan Burk who charged to a 4-0 lead only to miss a few key opportunities to finish the match and allow the eventual champion to reel off five straight legs to advance.

Joe Huffman was waiting for Big Daddy in the quarterfinal with everyone in the room knowing exactly what was on the line. It was exactly the top-class battle the crowd expected from these two great players; yet again, Young had to produce some gutsy heroics to erase a 5-3 deficit while surviving a total of seven match darts from Huffman to claim a 6-5 victory and eliminate his opponent from the World Championship race.

Young took on Danny Lauby (who himself produced a number of heroic performances over the course of the day) in the semifinals where he got off to a healthy 5-3 lead and appeared to get the breathing room he was unable to find in his previous two matches. Lauby had other ideas however, battling back to level on an impressive 11-dart leg with back-to-back 180s, to force the Pennsylvania man into yet another do-or-die situation. Once again Young showed his class and experience, firing back at Danny with an 11-darter of his own to seal the win and move into the final.

Saturday’s final was a rematch of Event #2 in March as Young faced off against Canada’s Jim Long. Unlike the earlier event (where the American surrendered a 5-0 lead) this time it was Darin’s turn to come from behind, overcoming a 3-2 deficit with legs of 16, 15 and 14 darts to claim yet another Championship Darts Circuit event crown. For Long, his runner-up finish keeps him in the race to overtake Matt Campbell – who was eliminated in the last 32 – for the Canadian spot at the Ally Pally. In order for Jim to return to England for the second consecutive year, he must win the 10th and final CDC event on Sunday and hope that Campbell once again fails to advance out of the second round.

In the opening stages of Saturday’s event, it was Florida’s Daniel Baggish, the winner of the PDC North American Championship back in July, who was the talking point in Philadelphia.

Baggish, who attended a CDC event for the very first time this weekend, stormed through the qualifiers, with averages of 110 and 111.2 in his two wins over Chris Brill and Mike McClain. In the main event, Danny replicated that sensational form in his second-round win over three-time World Champion, John Part, as the Floridan produced an average of 112.2 in a 5-0 win over the Canadian man. It’s the highest 3DA registered in any CDC event and Baggish’s third 110+ average of the day.

Baggish’s run petered out against Danny Lauby in the top 16 where he fell 5-3.

It’s going to be an interesting final event on Sunday as Matt Campbell and Jim Long battle it out for the World Championship spot. You can follow all of the action live on DartConnect at tv.dartconnect.com.

For all the results from Main Event nine, please visit: 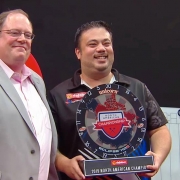 Baggish Rolls Through Field in Philly