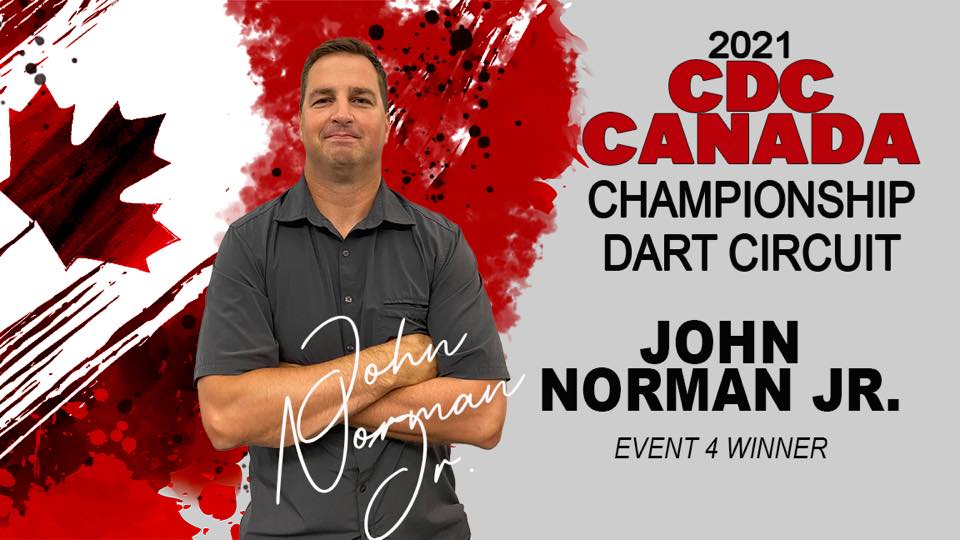 It almost wasn’t to be for Norman, whose tournament began with a scare, falling behind qualifier Floyd Osmond 4-2 in the opening round before completing the comeback with 3 consecutive legs to win 5-4 and move on. He poured it on after that, defeating Ross Snook 5-0 and then the #2 seeded Jim Long (6-4) in a back-and-forth affair in the quarterfinals. Norman found another level after that, with convincing wins over Jacob Taylor (6-1) in the semi-finals and Campbell (6-3) to claim the title.

Campbell, recently returned from Germany after winning the PDC European Challenge Tour and appearing for Team Canada in the Cazoo World Cup of Darts, defeated Keith Way (5-3), an on-form David Cameron (6-4), and Kiley Edmunds (6-0) in the semi-finals to reach the finals averaging just shy of 91 on the day.

David Cameron had the highest average during Event 4, with 92.91 across his 3 matches, and he also hit nine 180s, tying him for the lead with Jacob Taylor. John Norman Jr was third in both average and 180s hit, but led the way while converting 45% of his checkouts.

The players will meet again today in Event #5. Points earned this weekend will determine who the Canadian representative will be at the 2022 William Hill World Darts Championship in London. The top 8 Canadian players will also qualify for the Continental Cup tournament, this November in New York.

Live streaming of Event #5 begins at 4:00 pm EST on the Championship Darts Circuit’s Facebook page and PDC.tv, with the quarterfinals through the final airing exclusively on PDC.tv.