The 5th Event of the Championship Darts Corporation’s 2022 campaign, the Boomerang Tours Fiesta, featured a marquee final between two of North America’s biggest stars, both of whom have enjoyed major recent successes. Canada’s David Cameron won the World Seniors Darts Masters in May, and American Leonard Gates won the North American championship in New York earlier this month. On this day, it was David Cameron who emerged victorious with a 7-3 victory, averaging 97.1 over the ten legs.

“Soldier” Gates’ had the more difficult trip to the finals, having to get through Kevin Luke (5-4), Steve Warnock (6-4), and Gary Mawson (6-3) to reach the semis where his run almost ended against Event 4 winner, Jake Taylor. Taylor led 6-5 and had match darts to win, but Gates punished those misses, winning the last two legs on the spin to take the match 7-6.

Cameron’s run was more straightforward, with comfortable wins against David Fatum, Ryan Vander Weit, and James Solek, to reach the semifinals. He did have a hard fought, back and forth matchup vs Keith Way at that stage, eking out a 7-5 victory to book his place in the final.

Leonard Gates produced the highest average on the day, despite the loss in the finals, shooting a 92.9 over 51 legs. He was one of six players to average in the 90s on the day. David Cameron’s finishing was excellent all day, converting 46% of his checkouts. Jake Taylor’s run to the semifinals included an event high twelve 180s. 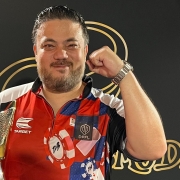 “The Gambler” Doubles His Winnings 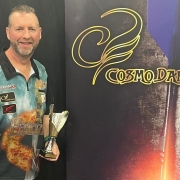 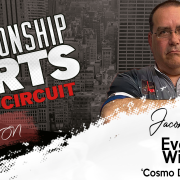